I always like to see what the participants are compared to previous years and see how the market is changing. This is usually a fairly good indicator of the market and demand. Let’s start of with the number of participants. Last year, this is a quote from the 2017 Survey, “This year represents the largest group of respondents in our history: 64,000 developers took our annual survey in January.”(link) Well, the good news is they almost doubled that this year with an astonishing 100,000 participants in the 30 minute survey!

Another area I like to look at is what are the most popular programming languages used in the current market. This not only tells you where the market is but what languages companies are choosing to make their money with. It is clear that JavaScript is ruling the roost but Java continues to be an in demand language followed closely by C#. I am a little surprised to see Swift actually fell off the list of the top 12 – I think Swift is a brilliant language but it’s just not getting the up take. With technologies like React and Angular I can see why… they are just easier and getting more powerful each year.

Node.js continued to dominate the frameworks and libraries section of the survey with Angular dropping an almost 8% from 2017 while its primary competitor React gained almost 8% in 2018.

With the continued popularity of the “full stack developer” it is no surprise to see Linux take the top spot in 2018 Platforms section, displacing Windows by almost 13%. While Windows dropped only 6% from the previous year Linux gained over 16% from 2017. 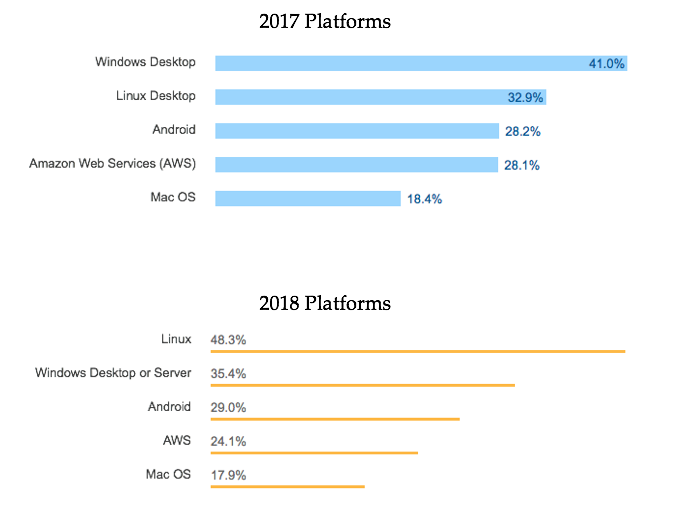 There are plenty of other interesting categories you should consider looking at. Even though they got rid of a few sections like “Diversity” and “Remote Work”, there are some pretty interesting comparisons.

Check them out here.